Football fans have been given the opportunity to play alongside former legends of the game – albeit on the poker table rather than the football pitch. The Poker Champions Cup in May will see the footballing and poker worlds collide when five former stars, led by Manchester United legend Denis Irwin, will each captain a team in the tournament at Juventus Stadium in Turin.

Irwin, who played over 500 games for Manchester United during a long career at Old Trafford, will join Stefano Tacconi (Juventus), Rafael Martin Vazquez (Real Madrid), Manuel Amoros (Olympique de Marseille) and Enzoo Scifo (RSC Anderlecht) as captains representing their respective poker teams.The rest of each team will be made up of poker players and football fans who have earned their place in the tournament through a series of qualifiers. 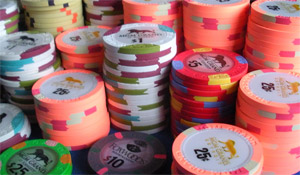 The five former football stars will each captain a five-man team in a five-handed sit-and-go tournament format of No-Limit Hold 'Em, similar to the group stage of this summer’s World Cup group stage. Players who come through their sit-and-go will walk away with a Samsung Galaxy Tablet and move onto the final table to compete for a World Poker Tour package valued at $6,000.

The team to accumulate the most points throughout the tournament will be crowned the winners of the Poker Champions Cup, with each of the five winning team-members receiving a VIP experience with the football club of their choice, including match tickets, a stadium tour, meet-and-greet with players, signed shirts and more.

Irwin, who was part of Manchester’s European Champions League winning side in 1999, said, "I'm not much of a poker player, so if the guys playing have as much ability on the table as they did on the pitch it's going to be a tough day. I'm sure the lucky online winners will give them a testing time too! It's an honor to be representing Manchester United and I'm hopeful of reliving my 1999 experience by clinching another European title!"

Irwin gained a reputation as a composed defender who couldn’t be ruffled during his career – skills he could use in poker – and the Irishman will hoping to have better luck in Europe than his former team have had this year. The Premier League giants failed to make it past the quarter-final stage of the Champions League after being dumped out of the competition by defending champions Bayern Munich. The German side are now favourites with bet365 to go on and win the tournament for a second successive year.

Irwin’s former Manchester United team-mate Teddy Sheringham earned almost $400,000 during a seven year spell playing live poker tournaments, including a 14th place finish in the 2009 £10,000 World Series of Poker Europe, and the Englishman is one of a number of former footballers who have entered the world of poker after hanging up his boots. Former Brazil star Ronaldo has recently begun life as a professional poker player, and the Poker Champions Cup is another sign of the growing relationship between poker and football.